Ali Gogarty
March 5, 2020
Share to FacebookShare to TwitterShare to Google+Share to LinkedInShare to PinterestShare to EmailPrint this page 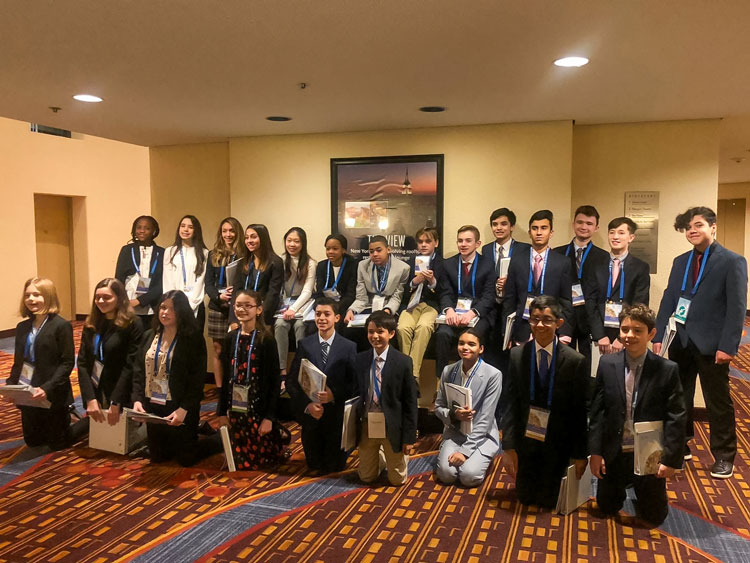 In late February, middle school students from The Red Oaks School traveled to New York City for one of their most anticipated events of the year, Montessori Model United Nations (MMUN). From February 19-22, students from around the world gathered to put their Montessori education into practice through participating in the procedures of the United Nations. As they have consistently done over their past decade of participation, Red Oaks students stood out for their preparedness, public speaking skills and ability to work cohesively within a group.

Each year, students from countries on each continent are assigned nations (not their own) to represent as delegates. They work in committees with other students doing the same, with the goal of reaching resolutions on various issues. This year, Red Oaks students represented Morocco, South Africa, Colombia and The Marshall Islands. The more than two thousand attendees are divided into 11 committees of 50-100 students and each committee is assigned two topics to address. The preparation for this event began in November, when countries and topics were assigned and Red Oaks students began conducting their research. Once they educated themselves on those subjects, the seventh and eighth graders could begin forming positions on their topics through the lenses of their assigned countries. In addition to the research and writing, students held mock conferences, committee meetings and presentations to rehearse both their public speaking and their ability to gain votes for their proposals and lobby for the chance to represent their committee by presenting their final resolutions at closing ceremonies.

All of the preparation paid off, as five Red Oaks students were chosen by their committees to deliver speeches at closing ceremonies. This represents a significant achievement, as only 60 individual students out of the thousands in attendance from hundreds of schools are chosen by their peers to take on that task. “The performance of our students at this conference speaks to a higher level of collaboration, motivation and preparation,” said Assistant Head of School Nely Miguel. “This is a huge accomplishment, and a well-deserved one, as our students worked incredibly hard to position themselves to be chosen for this honor by their fellow committee delegates.”

“The presentation skills, the ability to think on their feet – this is something our students begin learning and receiving active coaching on in the earliest grades,’ said teacher and MMUN advisor Susan Greenspan. “MMUN is the culminating event for the school to put those skills into practice and it really allows our students to shine.”

MMUN requires a level of professionalism, stamina and discipline that would exhaust most adults, but Red Oaks seventh and eighth graders were up to the challenge. They arrived at the conference dressed in professional attire, well-versed in UN protocol and confident in their positions on real life issues - and they had fun doing it. In between their conference duties, they enjoyed ping pong in Bryant Park, a scavenger hunt around the city and meals at iconic eateries. Parents and teachers agree, this year’s conference was one of the best yet, and students are already excited to repeat their success next year.

Congratulations to Luc Bush (Morristown), Jack Cotnoir (Morristown), Nina Davis (Livingston), Kaitlyn McNutt (Denville), and Susie Polito (Basking Ridge), who were elected by fellow delegates in their committees to speak at the MMUN Closing Ceremony. Also to be congratulated are Alessa Cooney (Chatham) and William Yarde (Maplewood), who were selected to present in the "What Breaks My Heart" activity.